Backgrounds: the power of suggestion! 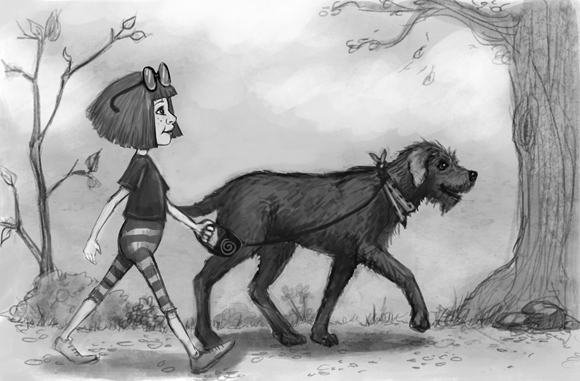 We have worked on how to put story characters in motion—both human characters and canine characters!

Ultimately, in a story, we want to put characters together in a scene.  I’m going to utilize the two characters we worked on—a girl and a dog—to create a story scene.

To create a complete scene, we really need a background. This gives the characters a world to live in, which strengthens the world of your story.

However, when creating such a drawing, it is so easy to feel overwhelmed by the very thought of drawing a background. It can seem like an impossible amount of work, but it really doesn’t have to be!

Take a look at the illustration above. I wanted my two characters to be out for a walk in a park. When thinking of a park, you may think of trees, grass, flowers, benches, children playing… you may think of a multitude of details. And that would be a great deal to draw in your background illustration, for sure.

The secret of creating backgrounds is:  you do not need to draw all of that!  Instead, you can simply suggest it.    The illustration above has a big tree.  This tree is not even fully drawn. It’s just some lines with shading, it only shows a small part of the tree but it suggests a much larger form.  And, around the top of the illustration, I drew a bunch of loose circles to suggest the tree’s leaves. 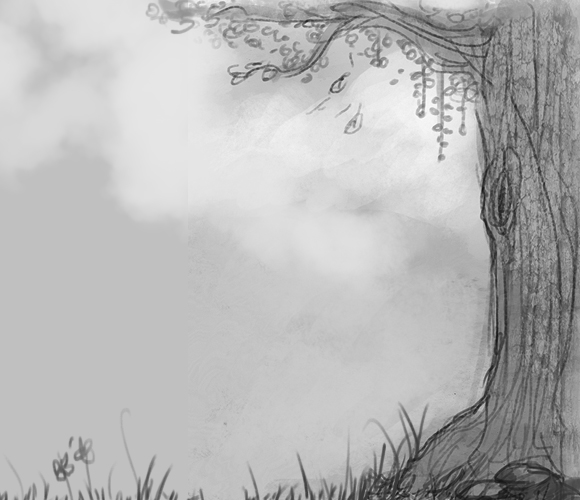 Now look above at the grass.  It’s simply a bunch of scattered lines! Uneven circles on the ground suggest small rocks and dirt.  And the flowers are just a group of circles bunched together!

In looking at this illustration, a reader will, all on their own, imagine even more details in their mind:  the park benches and children playing, more trees, and so on.  But I don’t have to draw them all!

Practice this with your next drawing.  Include some background details, but not all of them.  Suggest more complex objects by using simple lines and circles!  Pick out a few details to put in the background and, if you do this well, your reader will imagine the rest!