BACK TO TIP VAULT
A sentence that changes the wind


A costume for writing
- Tip -

Become a favorite character and begin! 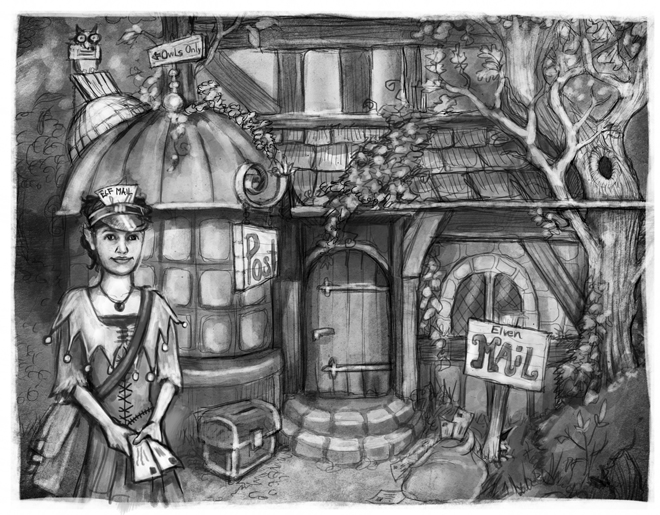 The young elf up above is a story character named Delia Sharp.  She lives in a part of the forest called Candleville and she is Candleville’s postmistress—which means she handles all of the letters going in and out.  She is energetic, kind, mischievous, a bit bossy and unfailingly curious.

In the stories, Delia Sharp sees most elves on a daily basis and she never fails to ask why someone is hurrying or frowning as they collect their mail, or who their new guest is, or why they haven’t done such and such with so and so.  She then gives advice freely, and almost always when she’s not asked!  She meddles!  But her intentions are always to help, to help elves feel more at ease and triumph over their troubles.

Delia Sharp is one of my favorite story characters.  Sometimes I want to step behind her counter and become her.  Because I have read all of the stories, I even know her well enough to write as her, which is exactly what Elf Elders suggest for when I feel stuck.

New idea:  Make a short list of your favorite story characters.  This list can have any sort of character on it, even an old badger.  Who the character is and whether they are animal, male or female, doesn’t matter.  The part that matters is that you know the character well from stories you have read.

Put the list of characters in plain view.  Then, when you start a story, if you start feeling nervous, go to your list and choose one of the characters.  This character does not need to appear anywhere in the story.  You never have to reveal to anyone that this character was involved.  You are just going to borrow the personality of the character for a little while, to get your story started!  Characters don’t mind lending a hand.  Delia Sharp likes to be in charge and is quite happy to hold the quill pen!

(If you don’t have a favorite story character, you might pull on a costume, as this tip explains A-Costume-For-Writing.)