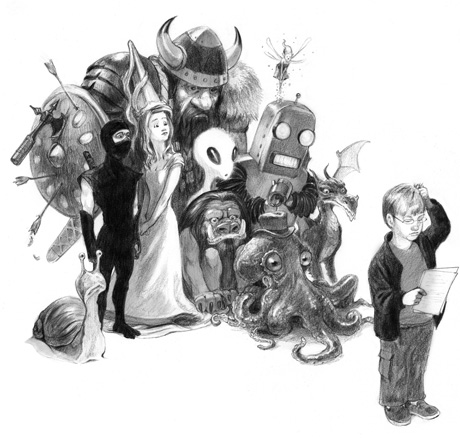 Joble the editor elf told me this story, about when he once worked with a writer named Johnathan.

“Sometimes a human writer and I will see a piece of writing through to its final publication.  We set off together to the room with all of the computers.  Here, the stories are given their final ink.

The writer reads handwritten pages aloud while I type to keep up.  I nod vigorously and approvingly at the story that is taking shape on the screen.  Usually, the publishing process is completed in one day, a single writing time.

Johnathan’s story was different.  Johnathan appeared with a folder of careworn pages.  When Jonathan began reading aloud, I knew immediately that this was a tale of epic proportions.  He sat with his folder, reading with feeling, as pages kept sliding off of the stack in his lap.

A number of characters had been introduced by the end of the first page, and a number of thorny situations and prized objects had been described by the third.  The characters were moving from place to place, battles ensued, and more characters arrived and entered into the story.  Writing time came to an end for that day, but the story seemed to have only begun.

The next week I returned, and Jonathan and I took up where we left off.  The deceptions and quests continued in his story, and I typed as fast as I could.  We saw none of the same places as the previous week, there was no trekking back to anything we had passed.  The direction of the story was forward.

On our third visit together, Jonathan seemed anxious.  Even he had lost track of many of the characters and, when he read aloud, even he seemed uncertain of where the story was going.

We reached page 27.  The writing was just as good on this page as it was at the beginning of the story, but our minds were now cluttered with characters and plot lines, and we had both lost sight of what mattered.

The hour came to a close and Jonathan looked at me with unmistakable worry.  He had created so much.  Could he possibly arrive at an ending that made sense?

But that would require many more pages, a good deal more careful thought and planning, and Jonathan had grown a bit tired of the story.  The story had, inadvertently, gotten bigger than he intended.

I made this suggestion:  Johnathan, feel free to leave this story right where it is.” 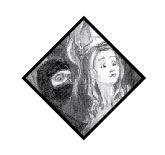 Now, if a story gets very wide in the middle, with the creation of many characters and many circumstances, the diamond looks more like this. 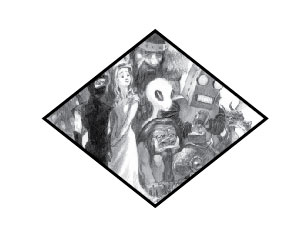 Compare the two diamonds closely!  They aren’t just a different shape, they are a different SIZE.  A story with a wide middle means a much bigger story overall.  A bigger story means more characters to take care of and more situations to resolve.

So, as we are writing, we want to be sure our story isn’t getting too wide and complicated in the middle.

New idea #2:  We really do need energy for The End.  You can think of this almost like a wilderness hike.

Let’s say you hiked a mile into a forest and then realized you were very tired.  You turn back, but as you turn, you realize you have exactly one mile still to travel.  Standing there, you might wish you had turned back a bit sooner, before you felt this tired.  And so it goes with stories!  You want to turn toward your ending before running out of energy.

Both #1 and #2 take considerable practice.  Every writer has made a middle that was too big, with too little energy left to get to The End.

Some stories are best left unfinished, which is what Jonathan did.